Sometimes, work gets too monotonous and a little fun is needed to help team members unwind. Team building exercises are a good way to have fun in the office and they have the added advantage of bringing workers together to form a healthy workplace rapport.

Here are some team building games/exercises that take 5 minutes or less:

The Helium Stick is a very popular workplace team building game and understandably so. It doesn’t require too many objects or participants, all participants are actively involved, and the game only takes a couple of minutes. The game may be played using a helium stick or any long, thin rod.

Participants stand to face each other with outstretched hands and extended forefingers; if there are 6 of them, they have to line up with 3 members on either side. The stick/rod is then balanced on their extended forefingers and all participants have to move in unison to lower the stick to the ground. If at any point, the stick is not in contact with the finger of one participant, or if it slips, the game has to be restarted.

The Helium Stick sounds simple; it isn’t. After two or three tries, team members will come to the realization that they have to work together and trust each other to have any chance of completing the task.

A participant sits blindfolded in a chair in the center of the room and a “treasure” is placed under the chair. The other members of the group then try to remove the object from under the chair without alerting the blindfolded participant. If the participant correctly points in the direction of someone trying to retrieve the treasure, the caught party is out of the game.

To make the hunt more interesting, the other members of the group may form—and move in—a circle around the blindfolded party, making it more difficult for him/her to pinpoint exactly where the threat is coming from. Once a “hunter” successfully retrieves the treasure, he replaces the blindfolded participant on the chair and the game restarts.

As the detective tries to decipher this, the murderer winks randomly—without being caught in the act by the detective—at the other members that form the circle. Whoever gets winked at has to mimic being killed (by falling down in an exaggerated manner). This places the detective is in a race to figure out who the murderer is before all participants get “killed”.

Participants stand in a circle around a blindfolded volunteer. A particularly noisy object e.g. aluminum foil or a tin filled with stones is then passed around quietly. The blindfolded party has to predict where the object is by tracking its sound.

Another very popular game, the Game of Possibilities tests creativity, quick thinking, and it will get everyone laughing in minutes. Here is how it works: all participants are given random objects e.g. a piece of paper, a ping-pong ball, a pillow, a plastic bag etc.

One after the other, each person has to go in front of the group to demonstrate —without talking—what the objects they were given can be used for, and the other members of the group have to guess what function is being demonstrated.

The main purpose of these exercises is to get participants to loosen up and have fun with their coworkers. This builds interpersonal relationships, making it easier to for them to combine and work together for the good of the company. Additionally, a little laughter goes a long way in lifting the mood around an office, and according to this article by Inc., a happy/satisfied employee is a productive employee. 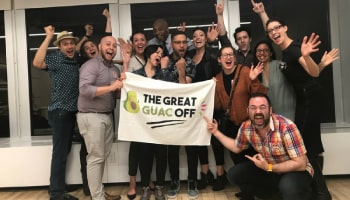